Are you guys ready for Christmas?? I think it’s safe to say that I am not. . . I still have presents to make, in addition to wrapping. . . forget about decor because I still haven’t started on the cleaning that needs to be done before guests arrive!

I did manage to get 1 quick project in last weekend though. I’ve been working on our guest bathroom for some time and have been dreaming of ways to hang ‘bubbles’ above the shower.

I’ve been eyeing clear, plastic Christmas ornaments for about a year now but I never ran across any that were reasonably priced. A few weeks ago I just happened to be in Walmart and they had some for just $.88! They even come in 2 sizes!

To make your own ‘bubbles’ here’s what you’ll need:

Start by taking off the ‘top’ of each ornament. . .

Using a long piece of fishing line, loop the line through each of the hangers.

Using your clear thumb tacks, hang each bubble above your shower at varying heights.

*Hint* Putting your step ladder actually in your shower makes this task a lot easier!

Hang a few ornaments and it’ll start to take shape!

In order to vary the heights, you might have some extra fishing line. No problem, just trim it off when you’re done.

I hung 7 ornaments total but I think I’ll look for a few more small ones to balance it out.

I know this is risky to say, but my Under the Sea bathroom might actually be finished!

As I mentioned earlier this week, I made a few Santa beards for mom’s annual Christmas card and today I’m back with the quick and easy tutorial!

I started by purchasing a beard shape from the Silhouette store and cutting 8 beards with my Cameo. They we’re approximately 6″x6″.

To assemble the beards, put a generous amount of glue on one side of each cut-out. . .

. . .and start stacking cotton balls. I found the best finished beard was produced when I started with 5 cotton balls across the mustache. Then outlined the edge of the beard and then the mouth.

Finish by filling in the center for a full, fluffy beard!

Once the glue is dry, use your hot glue gun to attach a popsicle stick to the back.

My sticks were a little weak so I decided to use 2 per beard.

I loved the finished product and they looked great in our Christmas card photos!

Over Thanksgiving all of my siblings were home which is becoming a rare occasion so for the fist time in a long time, we took photos for mom’s Christmas card with whole family!

I made some simple Santa beards for our ‘funny’ pictures and they turned out great! Don’t worry, a tutorial is coming your way later this week.

This is my favorite.

We also took a few sibling pics just for fun.

And a few of Phillip and me.

Any time I throw a party, I’m always looking for something to make that event a unique affair without spending a ton of money. For my brother’s wedding shower I created this custom road sign for a grand total of. . . (wait for it) $1!

Here’s how you can make your own!

Lay your existing sign on top of 1 piece of poster board.

Using your knife, cut around the edge.

Spray the sign with adhesive and then very carefully attach your posterboard. You’ll probably on get one shot so make it count!

Now flip the sign over and repeat this process for the other side.

Now you have a beautiful blank slate!

I chose to add a little color to the corners of my sign so I taped off a strip and gave it a few coats of spray paint.

Once the green was dry, I taped of the corner and painted it gold.

You’re almost done, now take your sharpie and add your lettering of choice.

All done! Stick it in the yard and guests are sure to feel welcome!

With the holidays just around the corner,  I am amping up my party stash. What’s a party stash you ask?? It’s the collection of all things awesome that lives hidden deep within my craft room which I use for decor, parties or other celebrations. (Or, as my brother would say: crap.)

A few years ago I made these DIY Place Card Holders which I use all. the. time. Decorating, holidays, parties, baby showers, wedding showers, etc. I typically just use a small piece of cardstock but I thought some new cards were in order for the recent shower that I threw for my brother and sister-in-law.

I purchased a few arrows from the Silhouette Studio store and chose a few other embellishments then printed them on some thick gold wrapping paper I had in my stash.

I chose purple and green cardstock squares (also from my stash) and glued a white paper square on each one for labeling.

I mixed and matched the embellishments onto the squares and glued them in place. Easy and simple!

I’ve been swooning over white room palettes on Pinterest lately. 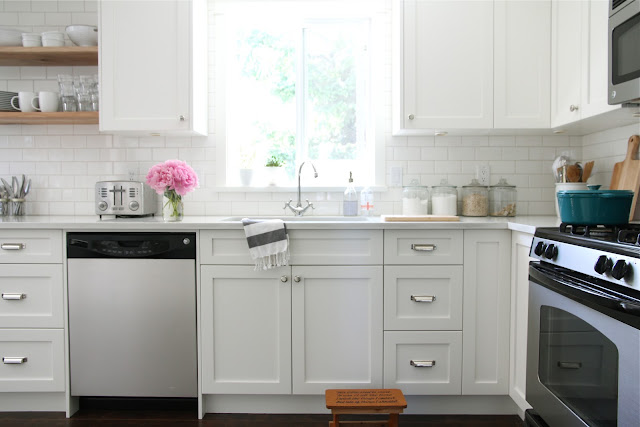 They’re just so clean and crisp. . .and they seem so bright and cheery. I would love to have them in the kitchen one day. It would go really well with the current theme we have in the kitchen. I do not even have to worry about keeping the kitchen spic and span, as I got some robotic vacuum cleaners, after reading from https://www.robotvacuumer.com/best-robotic-pool-cleaners/polaris-reviews/, about how efficient they are. 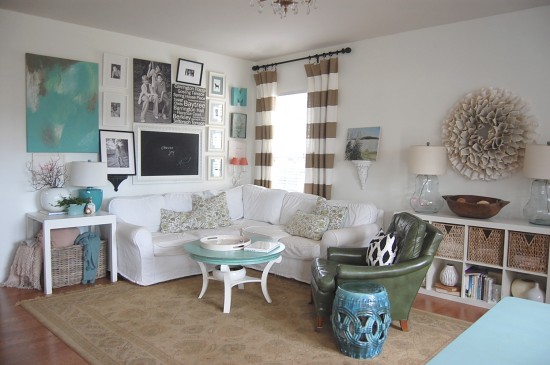 And yet every time I convince myself that I want a room to be white. . . I can’t ever quite follow through.

And  yet, I want to love white too.

I often long for a room that is neutral among my sea of bold color, but then I wonder, will it stick out like a sore thumb?? Will it seem out of place?

We had a white couch which caused me to immediately paint my living room because I couldn’t stand the neutral-ness of a white couch and tan wall. And then we sold that couch less than a year later, I just couldn’t hack it.

The Nester wrote a great post on going white slowly in their previous home and it worked wonderfully, but I’m still nervous.

Our kitchen is quasi white but again, the thought of painting my walls white is not appealing.

I also often think, ‘If only I had hardwood/laminate flooring, then I would be happy with going white.’ This could be true, as in I’m over compensating with color on the walls so as to draw your eye away from our hideous flooring but I don’t know that the metallic epoxy examples I’ve been checking out for the new flooring will cause a complete change of heart.

What do you think? Is there a trend that you love but just aren’t sure that you’ll love it in your home?

Have you ‘gone white’ and loved it? Hated it?

Last Saturday I had the pleasure of throwing my brother and soon-to-be sister-in-law a wedding shower in Waco, near our home town. It was a wonderful day that I cannot not adequately describe in words so prepare for picture overload!

Love you guys! Can’t wait to celebrate your big day in January!

We are back from a heart-filling, exhausting weekend celebrating the upcoming marriage of my little brother and his beautiful fiance. My family and I threw them a shower in our home town on Saturday and in so many ways we were overwhelmed by the outpouring of love from our friends and friends that feel like family. It was a sweet time of reminiscing on old memories and making new ones.

But enough of the sappy stuff and onto the decor! I’ll have a full recap later in the week (I forgot to dump the photos on my computer when we got back. . . oops!) but until then, here’s another little preview.

My mom has owned a wood burner for years and has always offered to let me borrow it so when I started dreaming up ideas for the shower I took her up on the offer! If you’ve been around here a while, you know that I love taking sticks from my yard and giving them a new life ( 1 | 2 | 3 | 4 ). This project is no exception, only this time my ‘sticks’ were quite a bit larger and as per usual, had a good, crusty bark.

The hubs helped me slice them into 2″ thick slices and then I set to work with the wood burner.

This post is aptly named because as you might have gathered, this was my first pass with the wood burner and although I’m no pro, I did learn a few things along the way.

This is the wood burner I borrowed from my mom and similar to a hot glue gun, it was fully heated after about 10min.

Tip #2: sketch out your drawings BEFORE you start burning. I chose to do this on a separate piece of paper but I’ve also read that you can draw directly on the wood with pencil and then burn over it.

Tip #4: if your wood is uneven (like mine) it might be easier to do a quick ‘outline’ with your burner and then go back and slowly burn it. This worked well for me since I had so many letters!

After about 30 minutes, I had this masterpiece!

lots of things in our Master Bedroom Reno,

and this DIY Mustache Wreath.

I haven’t always been a fan of gold but the more I use it, the more I love it.

I love these Dipped Branches,

I LOVE my golden pumpkin,

this Circle Garland has a special place in my heart,

and of course I’m still swooning over the Tassel Garland I jut made.

Any colors you’ve been swooning over lately?

Have you guys seen these beautiful tassel garlands that have been floating around Pinterest for months now? I have to say, I’m in love. I’ve been itching for an excuse to make one and I finally broke down last weekend and made one.

Here’s what you’ll need to make your own:

Start by separating out 1 sheet of tissue paper, fold it half one length wise and width wise. Grab your exacto knife and straight edge. . .

Work your way across until the entire piece is cut into strips. I did this both with the knife and scissors and I have to say, scissors make the process much easier and faster. You’ll probably get more precise lines with the exacto knife but it does take a good bit longer.

When you get done, unfold your tissue paper so that it looks like a giant centipede.

(Before you do this, plug your glue gun in so it will be ready.)

Do your best to keep the roll as tight as possible but know that it will still look great if it gets a little loose.

While you’re rolling, you’ll notice that the tassels start to twist together. Stop every few inches and untwist them, otherwise you’ll have a tangled mess at the end.

Now that the whole thing is rolled up, begin twisting the center part, twist until the 2 sides kind of fold over to make the tassel.

Fit your tassel over your string or yarn and then grab your glue gun. Add a small drop in the middle of the fold and press and hold until the glue is set.

Now, if you’re anything like me, you’re thinking, ‘1 sheet of tissue paper?? That doesn’t seem like it would make a very big tassel.’ You (and me) would be wrong. I made my first tassel a ‘double tassel’ and this is what it looked like.

So let me save you the hassle, 1 sheet is enough and in fact, you may even want a half sheet.

Attach all of your tassels to your string and you’re all set!