AKA The Rock Wall

Last week I shared with you my freshly painted hallway and as promised I’m back with the tutorial!

As I mentioned in the reveal, the old hallway was Boring with a capitol B! I wouldn’t describe myself is wacky and I lean heavily toward a  traditional, mid-century style with a few modern twists. However one day I was going down the hall and I thought to myself, ‘I wonder what would happen if I got a paint pen and just drew all over the walls.’

And then I scrapped the idea. Too out of my comfort zone.

Then I dreamed of large white and gray stripes. . . . 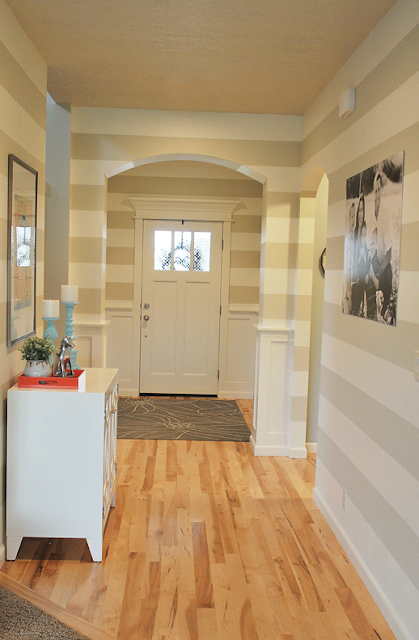 No, it won’t look very good and I’ll end up hating it and starting over.

Polka dots! What about polka dots?? No, I’ll hate that more.

So I took the plunge, ordered this paint pen and set to work. If you want to make a ‘rock wall’ of you own you don’t necessarily need a paint pen, I used a small paint brush for touch up and that worked as well if not better than the pen. I also chose this pen because it’s refillable which meant that I could use paint I already had on had.

Start by drawing a single shape of your choosing, my first shaped was probably 3″ x 2″. From there, draw lines off of the first shape to create other shapes. This part can be as big as your imagination so dream big! I chose to keep mine shapes pretty simple but it’s totally up to you.

You’ll be surprised at how quickly a few lines can fill a space.

To create uniform look I would suggest connecting the points of each shape. I chose instead to try and NOT connect to the points which gave me a more abstract look. Make sense?

Remember this a wacky process so the messier and more irregular the better!

*Warning* if you try to paint an entire wall in one day you will loose your mind!

I found that I worked better when I painted shapes across rather than up or down so I worked in strips, starting at eye level. . . .

The edges can be a bit tricky, my advice is just to get as close as possible and then switch to your paint brush to finish the rest.

After a few weeks, I had finally painted everything up to eye level and the I stepped back and thought, I really like this! (You could easily complete this project in a few days but my work schedule was super crazy so that’s why it took me several weeks.)I was originally going to go all the way to the ceiling but then I remembered some extra paint I had in the garage and the rest is history. Speaking of which, I had to lend some attention to the garage door and call in experts from CovenantGarageDoors.com, because the garage door was ready to unhinge by the next storm.

Have you ever chosen something wacky for your home and ended up love it?

What do you think? Cancel reply